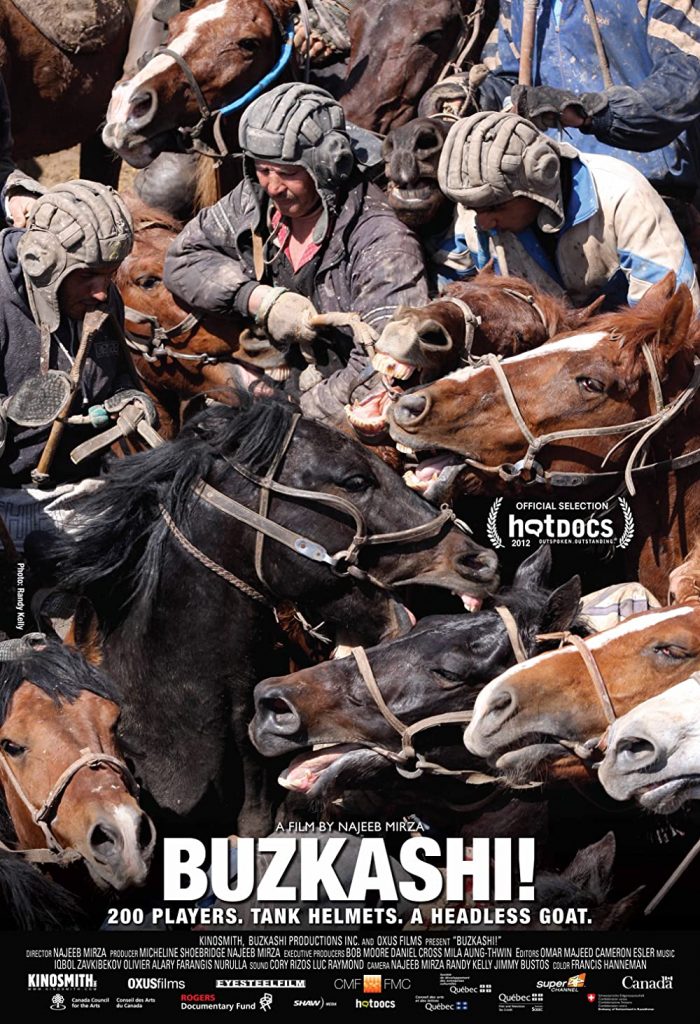 Since ancient times Central Asian shepherds herding their animals between pastures frequently faced attacks from wolves. To save their flocks brave horsemen would chase and grab the wolves, a skill that eventually evolved into a sport – the wolf replaced by a goat carcass. Playing among a mass of 200 horsemen, players demonstrated their individual strength, courage and honor by maneuvering through the scrum to carry the carcass across the goal line.

Azam lives in a small, dusty village in southern Tajikistan. He is a shepherd and one of the country’s best Buzkashi players. Following the tradition of his forefathers he plays as an individual, eschewing help from other players to win sheep, cars, carpets and cash. His winnings have helped him maintain a good life for his household of 30 people – his two wives, 10 children, parents, and families of two absent brothers. But times are changing.

Between challenges on the field and within his own family, Azam tries to find a place for himself in the new Tajikistan. Written by Najeeb Mirza

Azam’s success on the Buzkashi field is being increasingly thwarted by competitors playing under alliances, referred to locally as “mafias”. Such play is the field strategy used by his rival Khurshed, a member of Tajikistan’s nouveau riche who believes that teams are the future of the sport – he would like to see Buzkashi modernized, more closely resemble western sports: two teams fielding five players each. He himself has a team that plays together against individual and mafia rivals.

Off the field Azam has his own challenges. Expenses for his growing children are rising, prompting him to sell animals to make up for shortfalls. In the past his winnings from Buzkashi more than adequately supplemented his herding income, but the prizes have been getting smaller and the mafias more difficult to win against. And this year, his sheep have been unexpectedly dying.

New year festivities of the spring equinox (Nauruz) signify the end of the Buzkashi season. It is in these tournaments that the best prizes with the greatest prestige are to be had. Between the challenges on the field and within his own family, Azam must find a place for himself in the new Tajikistan.

“Part road movie, part coming-home story, this feature-length documentary follows two young men as they return to Afghanistan in search of their families. Amir and Soorgul were torn from their childhoods 16 years ago by occupying Soviet forces, who shipped them out of the country. We see flashbacks of Soviet tanks, hear radio reports of today’s war and soak in the breathtaking landscapes as the two men try to make it home on very different paths.”